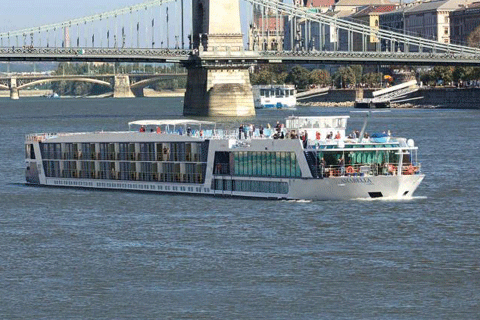 Ship: AmaVerde
Cruise Line: AMA Waterways
The itinerary information below reflects the original day-by-day port of call schedule for the Thursday, Aug 11, 2022 departure of the AmaVerde. If AMA Waterways modified this itinerary for weather or operational reasons after departing , the modified schedule would not be reflected here.
Want to book AmaVerde
194 Departures. Starting from $2399

Day by Day Summary and Map 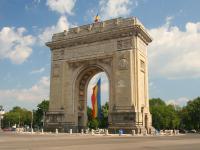 Bucharest, Romania's capital, has earned its nickname, the "Little Paris of the East", with its wide boulevards and Arc de Triomphe. Enjoy a visit to the city's most impressive sites-including the historic city center and the Palace of the Parliament. Or step back in history with a walking tour through Bucharest's Old Town. (B)
Day 3 - Saturday - Aug 13, 2022

Check out of your Bucharest hotel and journey through the Romanian countryside to Bran, where you'll visit Transylvania's legendary Bran Castle, forever linked with the legend of Dracula. Afterwards, enjoy a walking tour around Brasov. Later in the day, transfer to Brasov and check into your hotel. (B)
Day 4 - Sunday - Aug 14, 2022

Dracula lovers will be in for another treat with an excursion to Sighisoara, birthplace to Transylvania's most notorious ruler Vlad Tepes, also known as Vlad the Impaler, or Dracula. It's hard to believe that this perfectly preserved UNESCO World Heritage-designated town filled with resplendent pastel-colored buildings, stone lanes, medieval towers, and pedestrian-friendly Old Town was Vlad's place of birth. His home is still here, marked with a placard; however, today it houses a kitschy restaurant called "Casa Dracula". (B)
Day 5 - Monday - Aug 15, 2022

Your first stop on the road will be the quaint mountain town of Sinaia. While in Sinaia, you'll visit Peles Castle, considered by many to be one of the most stunning castles in Europe. Tour the castle, which was once the residence of the royal family. Following your excursion, transfer to Giurgiu where you will embark the ship for your Grand Danube cruise. (B,D)
Embark on your cruise in Giurgiu. Tonight gather onboard and meet your fellow passengers. (D)
Day 6 - Tuesday - Aug 16, 2022 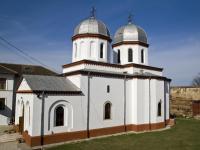 Travel through the Romanian countryside to the capital of Bucharest, known as the "Little Paris of the East". Enjoy a panoramic tour of the historic city center and its elegant architecture, followed by a visit to the Palace of the Parliament, the second-largest administrative building in the world. Later in the day, visit Bulgaria's ancient capital, Veliko Tarnovo, with its medieval fortress and multiple orthodox temples. You can opt instead to go to Rousse, known for its 19th- and 20th-century Neo-Baroque and Neo-Rococo architecture, and then afterwards visit the UNESCO World Heritage-designated Rock-Hewn Churches of Ivanovo with frescos revealing exceptional artistry of 14th-century paintings. (B,L,D)
Day 7 - Wednesday - Aug 17, 2022
Explore Vidin, one of Bulgaria's oldest cities, and surrounding areas with a choice of excursions. Discover Belogradchik, one of Bulgaria's natural wonders, where you can hike around its most spectacular rock formations, and Baba Vida Fortress, the largest preserved medieval castle in Bulgaria overlooking the Danube. Alternatively, be welcomed into a local home for a demonstration and tasting of traditional Bulgarian yogurt and banitsa, a delicious pastry with filo dough and cheese. Or you can choose to bike through Vidin for a more active adventure and see the castle. (B,L,D)
Day 8 - Thursday - Aug 18, 2022 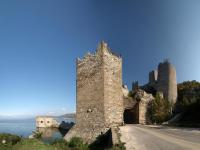 The Iron Gates are some of Europe's most awe-inspiring natural wonders. The Danube narrows as it winds through a series of magnificent gorges through the mountains. The banks of the river dazzle with sheer-faced rocks that stretch high overhead along this natural border between Serbia and Romania. The ancient Serbian king Decebalus is proudly carved into the mountainside and always captivates travelers. (B,L,D)
Day 9 - Friday - Aug 19, 2022 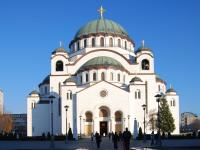 Explore Serbia's capital, Belgrade, on a city tour that includes the Kalemegdan Fortress and the Serbian Orthodox Temple of St. Sava. Or visit the Royal Palace, the official residence of the Serbian Royal Family; and then tour the House of Flowers, the mausoleum of Marshal Tito, who became the first President of Yugoslavia. Or enjoy a taste of the region by sampling Serbian plum brandy, slivovitz, and delicious local delights at the Quburich Distillery and travel to Avala Mountain. Later in the day, for those wishing a more active adventure, join a guided bike tour or hike to well-preserved Belgrade Fortress with its conical towers. (B,L,D)
Day 10 - Saturday - Aug 20, 2022 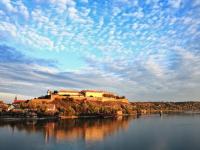 Enjoy a walking tour of Novi Sad to explore why some have called the city the "Serbian Athens". You'll see Dunavski Park and Stari Grad, the Old Town center. For a more active adventure, join a guided biking tour along the Strand and Danube Park, or a hiking tour to Petrovaradin Fortress. Alternatively, get hands-on with Vojvodina cuisine as you enjoy a lively demonstration and taste your culinary creation. Later in the day, tour the city of Vukovar, with its Franciscan Monastery, Church of St. Philip & Jacob, and Eltz Castle, an 18th-century manor that holds the Vukovar City Museum. Or, travel to Ilok, a center of wine production since Roman times, and sample its famous Grasevina, Traminac, and Frankovka wines. (B,L,D)
Day 11 - Sunday - Aug 21, 2022
Explore Pecs, founded more than 2,000 years ago by the Romans. Visit the UNESCO World Heritage-designated Christian Necropolis; St. Peter's Basilica, the city's main Catholic cathedral along with its catacombs; and Szechenyi Square, the heart of Old Town Pecs. Active travelers will enjoy a guided bike ride along the Danube and through Danube-Drava National Park, a protected flood-plain known for its populations of black storks, white-tailed eagles, and grey cattle, a national symbol of medieval Hungary. (B,L,D) )
Day 12 - Monday - Aug 22, 2022 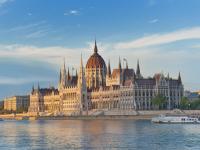 Tradition will be on full display in Puszta, the Great Hungarian Plain. Tour a genuine Hungarian csarda (farm) run by the world-champion carriage drivers, the Lazar brothers. Afterwards, be treated to an unforgettable performance of Hungarian horsemanship and then experience the warm hospitality, along with a traditional lunch complete with typical goulash. (B,L,D)
Day 13 - Tuesday - Aug 23, 2022

You cannot help but fall in love with Budapest, known as the "Queen of the Danube". Your city tour begins with a visit to the Great Market Hall. The remainder of this tour takes you to both the Buda (hilly) and the Pest (flat) sides of the river. Alternatively, hike up to Castle Hill for breathtaking views of the city.
Day 14 - Wednesday - Aug 24, 2022 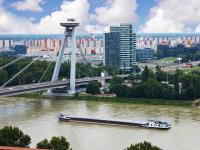 Host to the crowning ceremonies of many Hungarian kings and queens between 1536 and 1830, Bratislava certainly has earned the title "Coronation City of Kings" as you'll discover during your walking tour. Or savor local Slovakian craft beer at a local brewpub along with Slovakian snacks. For a more active adventure, hike up to Bratislava Castle, offering magnificent views of the city. (B,L,D)
Day 15 - Thursday - Aug 25, 2022 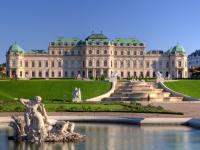 The "City of Waltzes" offers a treasure trove of gems and you have two ways to discover them. Join a city tour showcasing its regal splendors, including the majestic Opera House and the former Imperial Palace of the Habsburgs before concluding in Vienna's historic city center, a UNESCO World Heritage Site, and then visiting St. Stephen's Cathedral. For a more active exploration of the area, take a guided bike ride along the Danube and to Klosterneuburg Abbey, founded in 1114. (B,L,D)
Day 16 - Friday - Aug 26, 2022 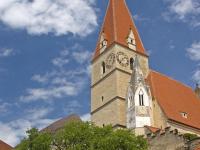 Be treated to several choices of excursions. Take a walking tour of Durnstein before visiting the UNESCO World Heritage-designated Melk Abbey. Or, hike the trail up to the ruins of Durnstein Fortress, where Richard the Lionheart was once held captive, and where you'll find spectacular views of the valley, river, and village below. You can also choose to cycle through the Wachau Valley on a guided bike tour to Melk. For a more culinary-focused experience, sample wine and special apricot treats from a local boutique. Later in the day, head up to the Sun Deck for panoramic views as you unwind with a scenic cruise through the Strudengau and UNESCO World Heritage-designated Wachau valley. In the evening, head ashore in Grein for an exclusive castle visit complete with wine. (B,L,D)
Day 17 - Saturday - Aug 27, 2022 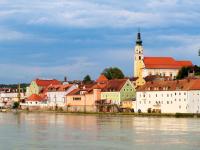 The ship arrives in Linz, where you'll have several choices of excursions. Opt for a full-day excursion to Salzburg where you'll tour the historic center, Mirabell Gardens, Residenz Square, and the Old Market. En route to Salzburg, stop at Mondsee, home of the Basilica St. Michael. Or, join a morning walking tour through the old city center of Linz and by the Mozart House; or go on a bike tour of the city's famed "Cultural Mile" and the Danube. During the afternoon, you have three more options. Choose a half-day excursion to Salzburg, or take a scenic drive through the Austrian Lake District with a stop in St. Wolfgang. You can also choose to visit charming Cesky Krumlov, located just over the Czech-Austrian border. (B,L,D)
Day 18 - Sunday - Aug 28, 2022 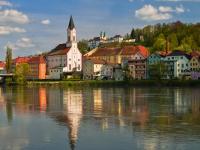 Discover the city of Passau in one of three ways. Enjoy a walking tour and marvel at Gothic and Italian Baroque architecture and St. Stephan's Cathedral. Or choose between a guided bike tour along the Danube River, or a guided hike up to the Veste Oberhaus fortress. Later, cruise to Vilshofen, where you will be treated to a festive Oktoberfest celebration - an AmaWaterways exclusive. (B,L,D)
Day 19 - Monday - Aug 29, 2022 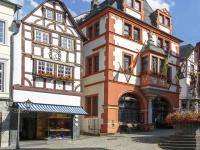 This morning, disembark your ship in Vilshofen. (B)
Disembark the ship and enjoy a stop in Regensburg. After a local highlights tour, head to Prague where you will check into your hotel. (B)
Day 20 - Tuesday - Aug 30, 2022 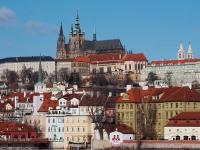 Discover fairytale Prague and its magical church spires via a city tour or a hike to Prague Castle. Both will reveal why Prague is considered one of Europe's most attractive and vibrant cities, with a historic city center that's recognized as a UNESCO World Heritage Site. (B)
Day 21 - Wednesday - Aug 31, 2022

Beer has been an important part of the Czech Republic since 993 when the first brewery was established. Beer is vital to the country's national identity, so much so that the Czechs are the biggest consumers of beer in the world. Join a beer tasting and discover for yourself what makes Czech beer some of the best in the world. (B)
Day 22 - Thursday - Sep 1, 2022

Bid farewell to Prague as you prepare for your flight home.
Save

Other Sail Dates and Itineraries on AmaVerde

CruiseCheap.com is a division of WMPH Vacations, a Florida-based travel company specializing in cruises and resort vacations. WMPH is short for "We Make People Happy:-) sm." While our name may be cute and bring a grin to your face, it's a philosophy we take very seriously. Making you happy is our purpose. In fact, we are so serious about this, we named our company after it.